Crayola crayons were introduced in 1903 by the Binney and Smith Company.(Edward Binney and Harold Smith were cousins) The “Apricot” color was introduced into the Crayola lineup in 1958. 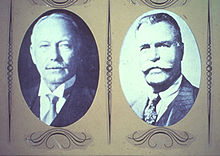 The name Crayola was suggested by Alice Binney, wife of company founder Edwin Binney, combining craie, French for “chalk,” because all the first crayola colors were based on chalk colors at the time, with the suffix -ola, meaning “oleaginous,” a reference to the wax from which the crayons were made. The original box of Crayola crayons consisted of 30 colors.

Introduced in 1958, the Crayola No. 64, going to 64 colors, was Binney & Smith’s largest regular assortment for more than thirty years, and featured the last major changes to Crayola colors before 1990. 1958 was also the introduction of the flip top box! The iconic flip-top box arranged sixty-four crayons in four rows of sixteen, progressively raised to allow for easier access, with a crayon sharpener built into the back of the box. We all remember that right?

The very pale background of light is my Apricot color! It was the color at dusk on the tree line!

This post is just one of many in the Color Your World: 120 Days of Crayola Challenge! Enjoy!

One Response to “Color Your World: 120 Days of Crayola; Apricot”

Mari's Travels with her Camera

Words and Images from around the World

The World Is A Book...
The Travel Lady In Her Shoes

My writing and photo journey of inspiration and discovery

inSpirations and inSights on my pebbled garden path...

Stories to Inspire, Encourage, and Give Hope

Retired and travelling - it doesn't get better than this!

Quirky thoughts on the ultimate question of life, the universe and popcorn.

compassandcamera.wordpress.com/
From Pyrenees to Pennines