This is Part III in a series called Going Green to Ireland. We are driving along the western coast of Ireland.

Saying goodbye to Ashford Castle today we are driving to Kinvara, where we will be staying in the Cois Cuain B&B. Mary Walsh greets us into her three bedroom cottage with  a garden overlooking the square and harbor close to the Dunguaire Castle, a 16th-century tower house on the southeastern shore of Galway Bay.

Dunguaire Castle is one of the most visited castles in Ireland. Tonight we will be attending a medieval feast of food, folk music and storytelling at the castle. Greeted by the butler, who gives us a brief history of the castle and a goblet of mead, we are led up the stairs to the Banquet Hall and seated on benches at long oak tables. I have learned another thing here this evening, even in the summer it is very cold in a stone castle. Bundle up!   We enjoyed our evening meeting other travelers and participating in the feast.

The next day, after Mary’s terrific breakfast, we head to the Cliffs of Moher. Facing gale winds and a torrential downpour we walk to the edge of the cliffs. On the way back to the car we stop to have hot chocolate in the tiny cliff restaurant to warm up!  Making our way to Dingle we enjoy the peacefulness of the drive, just looking at the scenery; the potato fields separated by stone walls and fields of cows. Going through Adare we stop and look in the old thatched cottages that are now shops. 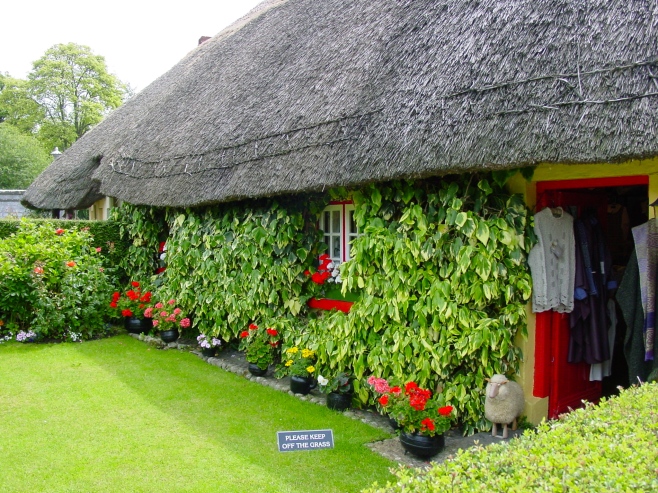 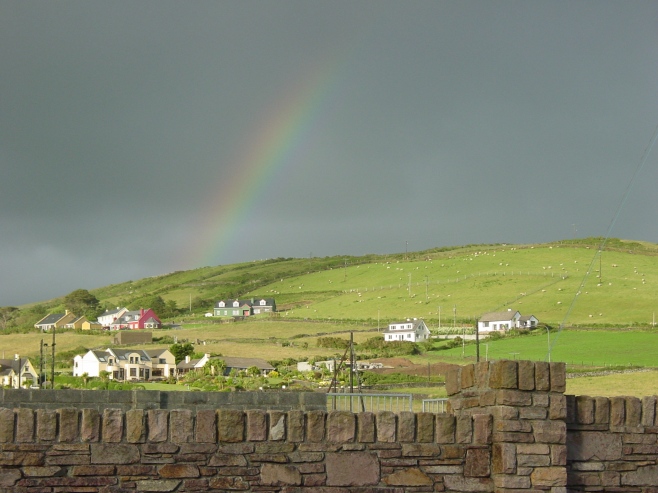 Dingle, is a fishing village on the mountainous finger of land that juts into the Atlantic Ocean that has supported various tribes and populations for almost 6,000 years. Because of the remote location and lack of specialized agriculture there is a large preservation of over 2,000 monuments from the Mesolithic Age onward. On our first full day in Dingle we signed up for a tour with Sciuird Archaeological Tours. (Screw-id)  The tour is offered by Tim Collins (a retired Dingle police officer) and Michael, his son. A group of six ventured off in his van. We were transported down tiny farm roads, (formerly cow paths) and over hedges and ridges to view mysterious stone tombs, sweeping seasides and long forgotten castles, all while Tim offered a commentary on the history of Dingle.

Two tours are offered: west to Gallus Oratory and east to Minard Castle.  We enjoyed both tours. Returning to Dingle, after the tours, we were delighted to find that St Mary’s Church was having a folk music concert that evening. Enthusiastic guests were toe-taping to Irish jigs and teary eyed with the slow haunting melodies. Afterwards, everyone to the pub!

For more information about the Cois Cuain B&B see: Several listings are on the internet under Ireland B&B’s

For more information on the Sciuird Archaeological Tours see: http://www.dingle-peninsula.ie/tours.html

Be sure to watch my video to explore Ireland!

2 Responses to “From Cong to Dingle”