There are two ways to get to the center of  The French Quarter from our spot in Marigny; stroll the seven blocks on Chartres St to St Louis Cathedral or take the Loyola-UPT Streetcar that ends near us at the French Market.

During our stay we do both. From the French Market  we get off the streetcar at Dumaine St and walk a couple of blocks to our first stop, the Cafe Du Monde, open 24 hours a day, seven days a week!

A large area of indoor/outdoor seating, the cafe is packed. The menus are imprinted on the napkin holders. The choices are coffee, soft drinks, orange juice and two sizes of beignets, either 3 or 6, smothered in powdered sugar. That’s it! I really can’t see what the hub-bub about the place is, but every time we passed by the cafe it was full. It’s been a landmark in New Orleans since 1862.

Continuing on we come to Jackson Square and behind that the beautiful St Louis Cathedral, the oldest continuously operating church in the US, built in 1720, rebuilt in 1789, becoming a cathedral in 1794.

In front of the church on a wide band of street there are small booths of fortune tellers, ice cream vendors and musicians. Stepping inside the church we get relief from the heat and humidity which is quickly rising.  Leaving the church and turning right  and then right again we are on a small cobblestoned alley with St Anthony’s Garden behind the church. This alley is known to the locals as Pirates Alley. 600 feet long and 16 feet wide it is not listed on many of the maps of the French Quarter. The smell of New Orleans is more intense here, a smell of damp vegetation and a faint woodiness lingering with the latin rhythms, salsa music and blues coming from the corner.  This corner was infamous for settling duels and debts of honor.  Jean Lafitte, the famous pirate, who provided services to any country at war against another by attacking their ships, brought the booty to town and the goods were sold in the alley. Eventually the Spanish Colonial Prison called the Calabozo was built on this corner in 1769. Lafitte and his men were jailed here by Governor Claiborne of New Orleans.  The prison was demolished in 1837, and the land was sold to make a long creole house which was the home of William Faulkner, where he wrote his first novel ”Soldiers Pay.”  The creole house is now home to the Faulkner House Books. Now at the intersection of Pirates Alley and Cabildo Alley, where the prison was, is the Pirates Alley Cafe, known for caribbean drinks and absinthe.

Traditional absinthe was made of anise, fennel and wormwood (a plant) with added herbs and flowers making it green in color. The herbs and spices were soaked in alcohol and then distilled. The drink called la fée verte, (Green fairy) in French, was thought to be highly hallucinative also. Yes, drinking a couple of those today one might see fairies and pirates!

One afternoon, not far from Pirates Alley, we made our way to the Grape Vine Wine Bar and Bistro. We spent a lovely afternoon wine tasting and choosing cheeses from the cheese board. Then we were served large portions of appetizers. I had the crab cakes and they were fabulous. The ambience and service in this bistro is outstanding.  With seating indoors or out this was our favorite spot in the old French Quarter.

Another highlight of New Orleans is the WWII National War Museum. Traveling by way of the Canal Streetcar, switching to the St Charles Streetcar, we got off at Lee Circle and walked the rest of the way to the museum. The large museum is separated into different buildings and exhibits. Upon entering the ticket building in the Louisiana Memorial Pavilion we were greeted by veterans who are here every day and volunteer their services at all of the different venues. It was truly inspiring to see so many retired serviceman still giving of their time.  Our first stop was the “Train Car Experience” where we boarded a train re-creating the tearful farewells and bittersweet returns of the men and women who went to war. Then we went upstairs to see the “America Goes to War,” “D-Day Invasion of Normandy,” “The Landing Beaches,” and the “D-Day Invasions of the Pacific.” All the exhibits were interactive and very interesting. One of the highlights of the museum was the short movie, “Beyond All Boundaries” produced and narrated by Tom Hanks. The movie is a journey of words and stories of actual WWII participants. The Solomon Victory Theater, where the movie is shown, has a screen 120 feet wide, with 9 digital cinema DPL Projectors. (a regular theater has only one) There are 27 surround sound custom speakers and 250 special effects theater seats that shake when the tanks are rolling by! Many of the props used to make the movie come alive are authentic pieces of equipment. There are 305 archival photographs and 517 film clips of actual footage shot during the war. You will not want to miss this special attraction.

Going outside the exhibits we looked at a WWII Victory Garden complete with posters! 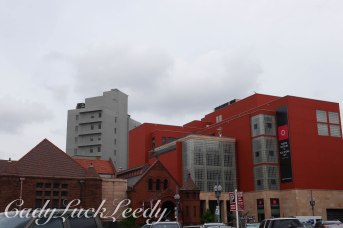 The other feature that I enjoyed was the “USS Tang” experience. Upon entering the submarine we are given actual sailors’ ID cards.  Using the ID of the sailor, we were assigned to his station and duty in the sub. 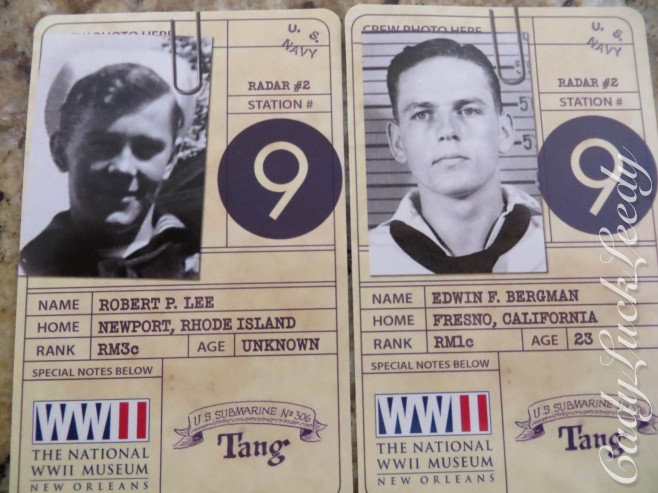 We had an interactive encounter recreating the last war patrol of America’s most decorated submarine in WWII! What a great time we had visiting the museum! There is the Stage Door Canteen and the American Sector Restaurant to eat in and then to wrap up our day we were entertained by the Marine Corps Band of New Orleans, part of the Memorial Day Concert Series. New Orleans has so much to offer; great food and drink, stunning architecture, history and perseverance. I think you will enjoy including NOLA to your list of  “Not to Miss.” Enjoy!