I really want to talk about luggage here. See all the steps?  What if you had to go from a) the bottom of that tiny stoned stairway to  b) the top where your lodging is? Would you want  to drag a large overgrown bear with you? Or better yet, could you carry that bear over your shoulders?  Now let’s also throw in, it’s hot outside, you are tired and you are not even sure if this is the right stairway to heaven.  Get the picture?  Less is more. You can’t take it all with you. Italy, France, Turkey, Germany, (you fill in the blank) like any other place has stores.  AND carrying too much will give you a headache to  boot.

So you say you will rent a car?  Well you still have to get from the airline terminal to the rental car agency.  Sometimes in order to get there this will include stairs, tiny narrow escalators, long tunnels with more stairs at the end, or a combination of all of them.  How much does that suitcase weigh?  What about the Borse, how heavy are they?  (See the next post about the Borse family)  Some of the most beautiful villages in Italy are all uphill.  Even downhill feels uphill to me.  Be prepared to pull or carry. Light. 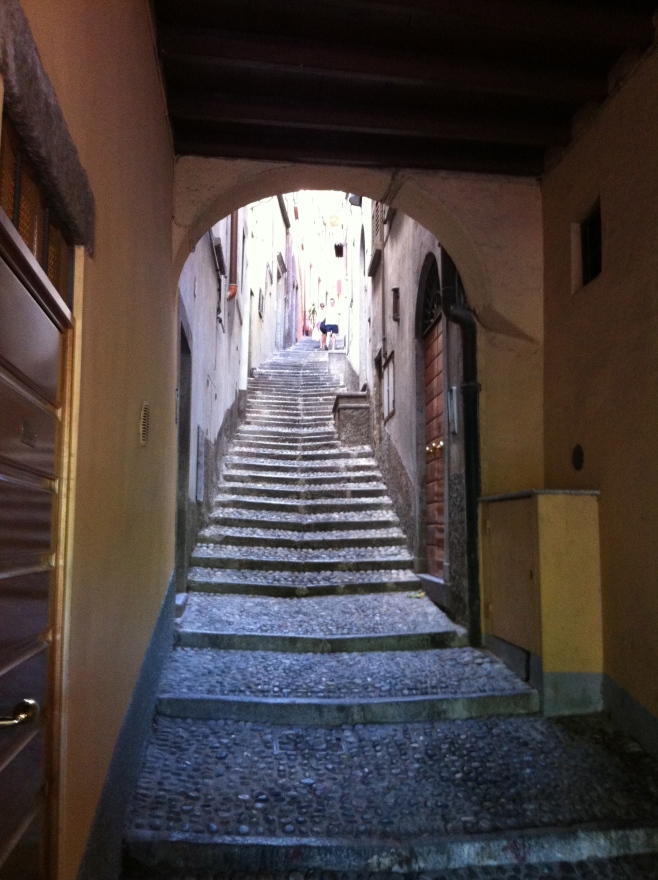 Once after landing at the Florence, Italy airport I made my way to the car rental area and found myself in line behind a group of two men and three women, who were traveling together.  Now I could sense this was going to be trouble from the get-go because the women were telling the men, in detail, what to do.   One gentleman filled out all the paperwork, as instructed by the ladies and when the agent thought they were through and handing over the papers, the women decided the other gent should be added as a driver as well. Back to the beginning. I stood in line for over an hour and the line behind me got longer and longer.
“Hellooooo, my knee was saying. Why are we standing still for such a long time?”   When it was my turn it took ten minutes and out the door I went.  Note:  Make all your car reservations at home and it will save you time and trouble.  When I got outside I found my car parked right behind The Group and watched in awe as they tried to get fifteen pieces of luggage into a mid-sized sedan.  Big luggage. They tried every which way under the sun, again at the direction of the ladies, and finally decided that the two large cases would have to go in the back seat of the car and the three women would sit on top of them.  Bent over.  Noses touching the seat in front of them.  Those poor men!  I hoped they didn’t have to go very far!  How would they be when they arrived at their destination?  I did not want to know.

I like to take the train most of the time.  The trains that are “Mind the Gap” are easily accessible, just step from a platform over a small open space and you are easily on. Prince Charming is never around when you need him.  Some trains in Italy are small.  The trains in Italy may look like this:  1. Narrow entrance to get on and off .  2.  Three or more giant steps that you must be prepared to hoist your luggage to and then yourself.  For me it is luggage first than me.  3. Trains are on time (well Italian time) so you have to get a move on when the train comes to a halt. 4.  Be prepared for the entrance to be crammed with people who do not want to move to a seat.  Picture this. I was taking a train from the Zurich Airport by way of the local train. I had to take a train to get to another train. The train stopped, the door opened and all I saw were faces and piled high luggage.  I quickly assessed the situation. The train was ready to depart  so up went my case and I scrambled on behind it. Nobody moved. We were eyeball to eyeball with my suitcase squeezed between us. I couldn’t even turn around to face the door and just hoped my fanny would not get caught in it when it closed.  I looked up and read the sign. Do not lean on the door.  Luckily, I only had one stop to go before we all poured out.

Sometimes after you reach your destination in paradise there are stairs just waiting to greet you.  So you have a room booked on the first floor?  Well that will be the second floor in Europe. Most hotels do not have an elevator or if they do it is tiny,  not room enough for you AND a large suitcase.   You must be able to carry your luggage up the stairs. By the time you get there heavy luggage will make your knees weak, your legs screaming, your back aching, and give you a killer headache.  You will need a drink!  Or two, but won’t want to walk back down those stairs!

So what kind of luggage do I travel with? One on wheels, durable, but light weight.  It measures 16X23 inches and has an easy to recognize name tag 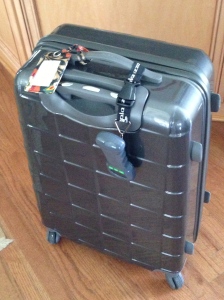 and strong pull out handle to slip on Papa Borsa because he doesn’t like to be carried.  Remember that your luggage does not like cobblestones, so it must have a durable handle that can lift it to carry and will not break easily.  My favorite accessory is the luggage scale.  Don’t leave home without it. You don’t want to get to the airport upon departure to have the smiling attendant say your ticket is now @$$%%^^^%#$$$$ because it is overweight.  You will be directed to another line to take stuff out or re-arrange it. Re-arrange it to what?  Use that scale beforehand and know how much the suitcase weighs.  Practice walking with your suitcase full. Go up and down your stairs at home carrying it.  Can you do it?  Remember the knee bone is connected to the thigh bone and the thigh bone is connected to the back bone.  All the way to your head.  Save yourself a headache.  Travel light. Now let’s get down the stairs!  How about these?

Stairs in B&B, Amsterdam, the Netherlands