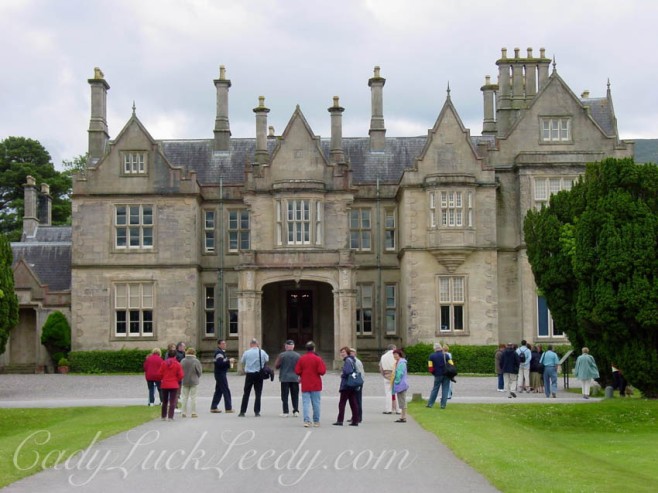 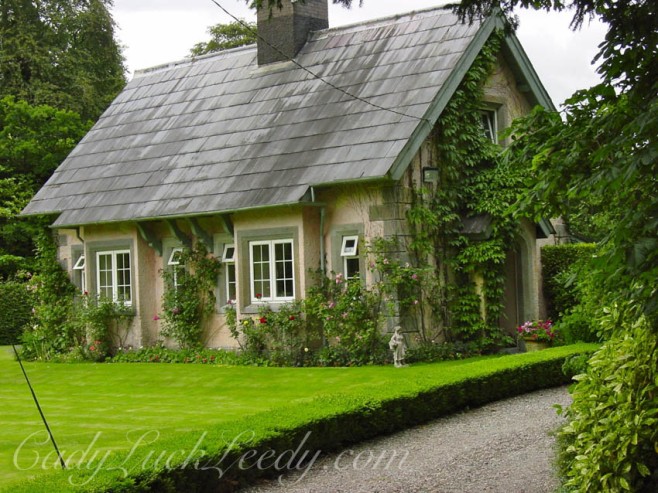 There is every shade of green in Ireland, so today I am going to share Muckross House with you! These are some of my favorite pictures of Yellow Green!

The sixty five roomed, Muckross Mansion, built in Tudor Style, was designed by Scottish architect, William Burn, and completed in 1843 for Henry Arthur Herbert and his wife, the watercolorist, Mary Balfour. Mary met Henry in Rome and married him in September, 1837. The estate was given to her, by her grandparents, for a wedding present. She loved the grounds, as it reminded her of the family home in Scotland. She brought a large dowry to the marriage equivalent to 3.28 million pounds in 2016, and she and Henry used part of this money to start construction on the house in 1839. She then worked at developing her talents as a watercolor artist, and with no formal training or formal art education, she displayed considerable skill.

Less than twenty years later, in preparation for a visit from Queen Victoria in 1861, extensive improvements to the house and contents, were made for the Queen’s visit. Tapestries, mirrors, Persian carpets, silverware, musical instruments, linen, china and new servants’ uniforms are said to have been specially commissioned for the queen’s visit. Special curtains for the Dining Room were woven in Paris, also to please the Queen.

The Queen’s apartments at Mockross were described by the local press as: “An entire section of apartments has been set aside for the royal family so that they do not need to communicate with the Herbert family when passing through halls. The Queen will live in privacy, and from her rooms can walk onto the delightful grounds, which will be kept private during her stay.” It was clear the Herberts thought the Royal couple and friends would stay awhile.

The Queen, Prince Albert, and two of their children spent two nights there!  Little time was spent with the Herbert family and on the last day, Queen Victoria took a carriage ride around the grounds with the Mrs. and then Queen Victoria and entourage went to the train to go elsewhere. As a farewell gift Mary gave the Queen two of her paintings of the landscape at Muckross.

Moral of the story: never re-do your house to please someone else. If they want to come, they can come as you are. Don’t live above your means.

The restorations resulted in huge financial difficulties for the Herbert family, which resulted in the sale of the mansion and the 11,000 acre estate.

Henry died in 1866, (he probably never fathomed being in debt), and Mary with two of her daughters moved back to England, where she lived until 1871, and then moved to Lake Como, Italy, to continue her artwork. She died in London in 1893 and was buried next to her husband in the family vault near the Muckross estate.

In 1899 the estate was bought by Arthur Guinness, who wanted to preserve the landscape.

In 1911, the house and estate were sold to William Bowers Bourn, a wealthy Californian involved in mining. He and his wife passed the estate to their daughter, Maud and her husband Arthur Rose Vincent, as a wedding present. The couple lived there until the death of Maud in 1929. In 1932, her parents and her husband decided to give Muckross House and the 11,00 acre estate to the Irish people and it became the first National Park in the Republic of Ireland. The house and grounds are now part of Killarney National Park.

Yellow Green has been in the Crayola Collection since 1930. It is also known as Monster Green in the “Halloween Crayons” series. The Muckross House and estate turned out to be the green-eyed monster for the Herbert family, but a windfall for the people of Ireland!

This post is just one of many in the Color Your World: 120 Days of Crayola Challenge!

Check out some of the other 150+ challenge participants, it’s amazing what we have done with the Crayola colors!

5 Responses to “Color Your World: 120 Days of Crayola; Yellow Green”

"Two roads diverged in a wood, and I— I took the one less traveled by, And that has made all the difference." The Road Not Taken, by Robert Frost

The World according to Dina

Notes on Seeing, Reading & Writing, Living & Loving in The North

Garden writing lifts me up.

Ideas from a Suffolk garden

Creative Exploration in Words and Pictures

Mari's Travels with her Camera

Words and Images from around the World

The World Is A Book...
The Travel Lady In Her Shoes

My writing and photo journey of inspiration and discovery