The Fuchsia is Sooooo Beautiful!

The Parsonage in Broadway, UK

Broadway’s name fits the village.  Village life is lined along a broad grass-fringed, red chestnut way, so we started at the end with the Christmas shop and made our way to the center of the village. Broadway will not disappoint you, as it is chock  full of restaurants, inns, pubs, antique stores, coffee shops, and gift shops. Whew!  In one gift shop we had a big time looking over one gift item in particular! Here is one. Can you guess what it is?

A porcelain, hand painted nose for  glasses/spectacles!  Never lose your glasses again!  The nose knows! The English have such a sense of humor! It is a gift for my mother-in-law!

There is also a local market, the Broadway Deli,  and a larger grocery, called Budgens, located down a narrow strip of walkway deep in blooming lavender and pale pink shrub roses! It was the first large grocery we were to find in our Cotswolds travels. More dogs lounging here! The dogs are either sleeping under the benches or waiting patiently at shop doors!

The Village Deli in Broadway, UK

The Pathway to Budgens in Broadway, UK

My favorite discovery in Broadway was a public restroom right next to the large central parking lot.  Maintained by a meticulous gentleman, he promptly made us aware that the restroom had been declared, “Loo of the Year.”

The “Loo of the Year,” Broadway, UK

The sign was proudly displayed and rightly so. The loo was spotless and the squarish Cotswold stone building fit right in with the architecture of Broadway. Who wouldn’t want to live in a place that can boast the “Loo of the Year”?  My other delight were all the hanging baskets of pink fuchsias and purple cascading vines. They were beautiful and hanging outside several of the shops. We spent a lovely and lively afternoon in Broadway. You will want to add Broadway to your Cotswolds calendar!

The Lavender of Broadway, UK

The Pathway to Budgens in Broadway, UK

The Lavender of Broadway, UK

A Tired Puppy in Broadway, UK

On the Broad Way of Broadway, UK

A Coat of Arms in Broadway, UK

The Cottages of Broadway, UK

The Christmas Shop in Broadway, UK

A Garden across from the Christmas Shop in Broadway, UK

For your reading enjoyment I have selected a hand printed and watercolored book by Susan Branch, titled A Fine Romance; Falling in Love With the English Countryside, that I literally devoured. A travel journal of her two month ramble through the backroads and small villages of the English countryside, it is filled with pictures, witty captions and charming detail of her dream to visit her long awaited England. For more information on Susan’s work see: http://www.susanbranch.com 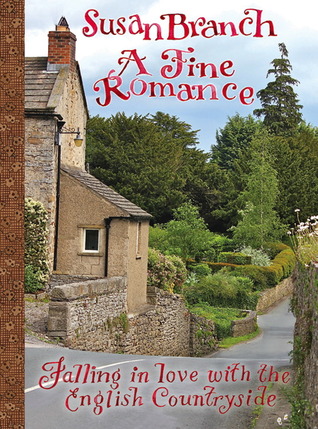 2 Responses to “A Cottage in the Cotswolds: Broadway”